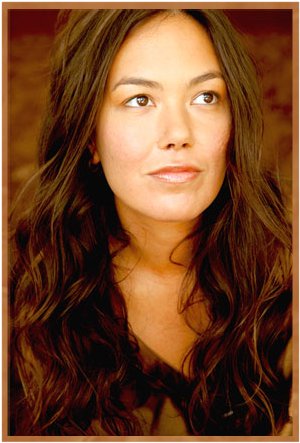 Raised outside of Denver, Colorado, Tina began her musical training at a very young age as a classical pianist. Taught by her mother, a concert pianist and opera singer from Korea, she rigorously studied piano until the age of 12. At that time, her passion for music moved from piano to voice. At age 15, Tina began learning the guitar, and at 16, she graduated from high school and attended the University of Colorado at Boulder as a Voice Performance Major. After one year, driven by a strong inner quest, she moved to Hawaii where she began exploring and writing her own music.

In 1996, Tina worked as a recording artist and co-producer for Music for Little People and Earthbeat! Records in Redway, CA, where she performed on such albums as Circle of Women, All Spirits Sing w/ Joanne Shenendoah, Lullaby Favorites, and many others. In 1997 she attended The Recording Workshop, a sound engineering school, in order to learn the technical aspects of studio recording.

In 1998, Tina moved to the San Francisco bay area and started working on her solo recording, Shores of Avalon. During that time she also began working as a studio vocalist, a sound engineer, and performing in various groups as a back-up singer. She performs and records with such artists as Jai Uttal and the Pagan Love Orchestra, Ty Burhoe (Curandero), Bill Douglas (Hearts of Space), Steve Gorn, Lost at Last, Danny Heines and others. (Please refer to the artist links page for more information about these artists).

Inspired by many musical and spiritual traditions from around the world, Tina’s writing style is contemplative, devotional, and joyous in nature.

Read reviews of:
[The Shores of Avalon]
[The Silent Awakening]

[The Silent Awakening at CDBaby]
[The Shores of Avalon at CDBaby]