Hey all you (lucky) Los Angelinos…two folks from a band that both Anna Maria and I like, BREECH, are in a play that is beginning it’s run soon! Check it out!! 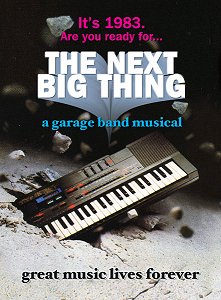 A world premiere garage rock musical with music and lyrics by members of indie band Breech (indie-music.com’s Top 25 CDs of 2007 for “Tarnish and Undress” and winner of the 2003 DIY Album of the Year with its release, “Apron Strings”) is set to rock Hollywood this summer. THE NEXT BIG THING, with book by Jeff Favre and music and lyrics by Breech’s Missy Gibson and Mike Flanagan, opens on Saturday, July 19 and continues through August 16 at art/works Theatre on Santa Monica Boulevard.

It’s 1983, and Chip and his budding garage band are looking for the new sound that will take them to the next level – much to the dismay of Chip’s mom, Melissa – a singer-songwriter from the ’60s with a checkered past and a belief that good music is more than a simple hook.

“When Jeff first approached me, it was just to write the music,” laughed Gibson, who also plays the role of Melissa. “As I was reading the script, I recognized some of the dialogue and incidents. That’s when he said, ‘Oh, yeah, I kind of based the character on you – I hope you’re okay with that.'”

“I’ve always loved the ’80s and never understood why there are no musicals about that period that really click,” said Favre. “I’m a writer – and I knew that if I could collaborate with professional songwriters who could tell a good story with their songs, we’d be on to something. Then, an incident in Missy’s life sparked an idea for that story – and here we are.”

THE NEXT BIG THING is unique in that it blends two distinct musical styles to tell its story. The songs performed by Chip’s band are straight 80s retro pop dominated by the DX7 – the first commercially successful digital synthesizer that was so ubiquitous in the music of that era. The rest of the songs reflect the versatility of Gibson and Flanagan’s writing that is only hinted at in the edgy sound of their acclaimed band, Breech.

Favre co-directs with Rachel Maize, and musical direction is by Breech’s Mike Flanagan. In addition to Gibson (who as an actress studied with Uta Hagen and as a musician was dubbed “the best independent singer/songwriter in the country” by her native Detroit Metro Times), the cast features Brandon Ruckdashel (“Riley” in the popular cable series The Lair, Off-Broadway’s Ascension – “Brandon Ruckdashel makes a stunning debut” – New York Times) as the 18-year old Chip, and Matisha Baldwin (Ovation Award-winning production of Dreamgirls, NAACP Award-winning The All Night Strut); Jason Director (Atlantic Theatre Co.’s An Adult Evening of Shel Silverstein) and Michael Thompson (A Noise Within’s Romeo and Juliet ) as Chip’s aspiring band-mates.

Also in the cast are Heather Belling, Curt Bonnem (The Beastly Bombing) and Ellen D. Williams (title role in Garage Theatre’s The Book of Liz). KROQ’s Lisa May of the Kevin and Bean Show makes a cameo appearance on Friday nights.

Jeff Favre’s comedy, Cubicle, premiered at Downtown L.A.’s Theatre Expresso. He headlines and hosts the annual Jath Live at The Lounge Theatre in Los Angeles, which he also produced and performed at several venues in Chicago and New York – an outgrowth of jath.com, the longest running comedy video show on the web, which he has hosted for ten years. He also directed Rachel Arieff’s kooky, underground one-woman cabaret show, How to be Happy All the Time at the Hollywood Ramada Inn. Jeff writes for Back Stage West, the Daily Breeze, the Downtown News, and has a weekly entertainment column in the Ventura County Star.

Breech embodies the musical vision of Missy Gibson and Mike Flanagan. Born and raised in Detroit, Gibson moved to L.A. in 1996 and released two independent CDs with Breech, in 1999 and 2000. In 2002, with Flanagan on board, Breech released its first full-length CD, “Apron Strings”, which won the 2003 DIY Album of the Year. Last year, the Breech CD “Tarnish and Undress” was picked by indie-music.com as one of the Top 25 CDs of 2007 (“Led by vocalist Missy Gibson, who stops you in your tracks and makes you pay attention to her every word, this is an album sure to be treasured by all who discover it”), and has recently been receiving airplay on KCRW. Several of Breech’s songs have also appeared in film and on TV. Prior to meeting Gibson, Breech guitarist/songwriter Flanagan performed and wrote with L.A./Oakland-based band Giant Ant Farm as well as fronting alt-rock band Willoughby, where his songs appeared in Buffy the Vampire Slayer as well in several independent films. He’s currently also performing and writing with The Lisa Marr Experiment, which in 2003 released “American Jitters”, their sophomore release on Sympathy for the Record Industry. A native Angelino, Flanagan has received many accolades for his multi-instrumentalist and songwriting abilities. “Flanagan is a striking talent… an impressive songwriter… a commanding vocalist… (with) Elvis Costello’s tunefulness and full-bore passion…” wrote the Los Angeles Times. Breech has toured the country extensively, both on their own and opening for many national acts, including Weezer, the late Jeff Buckley, White Stripes and Liz Phair.

Audience members will have the chance to see Breech perform live following performances of The Next Big Thing on July 25 and August 15. On July 19 and August 1, 8 and 16, everyone is invited to stay after the show for karaoke with the cast.

Set design for THE NEXT BIG THING is by Davis Campbell; costume design is by Sharell Martin; lighting design is by Matt Richter; props are by Noelle Leiblic; dramaturg is Gina Egger; production stage manager is Angie Estevez; and Racquel Lehrman/Theatre Planners produces for Jath.com Productions.

Art/works Theatre is located at 6569 Santa Monica Blvd. in Hollywood, west of Vine. art/works is air-conditioned and wheelchair accessible. For reservations and information, call (323) 960-4418 or go to [ http://thenextbigthingmusical.com ]

2 comments for “The Next Big Thing”