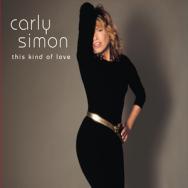 Hear Music announced today that it has signed renowned singer-songwriter Carly Simon to release This Kind of Love, her highly anticipated first album of all-original songs in eight years. She joins the elite roster of Hear Music artists that includes Paul McCartney, Joni Mitchell and James Taylor. The album will be released at Starbucks Company-operated locations in the U.S. and Canada as well as traditional music retail on April 29, 2008.

This Kind of Love ranks among Simonâ€™s most personal albums as well as one of her most stylistically diverse excursions with songs ranging from gorgeous melodies to driving rhythms. The CD is co-produced by Simon, Frank Filipetti and Jimmy Webb who also wrote or co-wrote most of the arrangements. Filipetti worked his talent as the engineer as well as producer. The three first teamed up for Film Noir, Simonâ€™s album of standards that Webb produced in 1997.

The musical inspiration of the CD comes from Simonâ€™s fascination with Brazilian music, whose rhythms are subtly infused throughout. Even though she grew up listening to such classic artists as Antonio Carlos Jobim and Luiz Bonfa, it was Simonâ€™s recent discovery of modern-day Brazilian musicians Caetano Veloso and Jorge Ben that made her realize â€œyou donâ€™t have to be singing bossa nova or samba to get the essence [of Brazilian music]. There are songs that fit no one rhythm or generic type or song progression.â€

← Album Review: Siren Song by Sweet Soubrette
Your ‘Do-Good’ for Friday & something to do tonight →