Iceland is a land of puffins, volcanoes, eco-friendly Vodka and amazing music festivals.

In honor of Icelandâ€™s 63rd birthday, Reyka Vodka and Iceland Naturally have just announced a once in a lifetime contest for 1 lucky winner and 9 friends to fly to Iceland for three days and 2 nights of partying, soaking in the Blue Lagoon, sight seeing and to attend the world renowned Iceland Airwaves Music Festival. 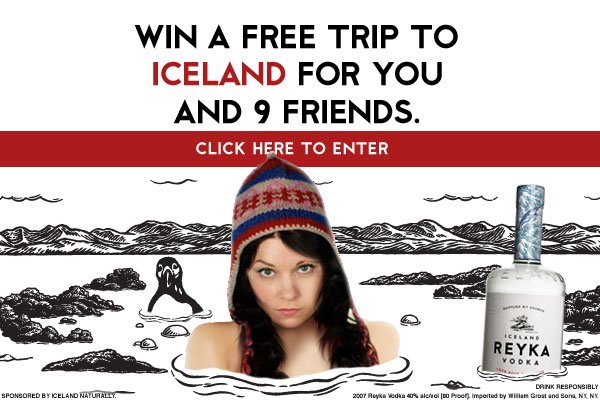 Iceland Facts: (I didn’t make these up, they came from the company)

– 10% of the population of Iceland believes that elves â€œdefinitelyâ€? exist

– Astronauts practiced for their moonwalk in Iceland

– All of Reykjavik is heated by underground hot springs

– The first vodka distilled and bottled in Iceland (land of puffins, volcanoes and a female president)

– Made from glacial water (sort of like how Jesus turned water into wine, not that Reyka is like Jesus or anything)