After two records and a Grammy nomination, Tift Merritt took hiatus with a piano in Paris and was rewarded with an unbridled inspiration and a wealth of her most accomplished songs to date. On February 26, Concord Music Groupâ€™s Fantasy Records will release Merrittâ€™s Another Country.

Track Listing:
1. Something To Me
2. Broken
3. Another Country
4. Hopes Too High
5. Morning Is My Destination
6. Keep You Happy
7. I Know What Iâ€™m Looking For Now
8. Tell Me Something True
9. My Heart is Free
10. Tender Branch
11. Mille Tendresses

Read more about it and see tour dates:

After intensive touring, Merritt erased her grueling schedule and rented a flat with a piano in Parisâ€™s 10th arrondisment planning to take time off. Merritt recalls, â€œDays were wonderful there. I wore the same clothes nearly everyday. I would take a coffee in the street, say hello to the good people in the little wine store across from my door,â€ she writes. â€œI cannot explain what happened except to say that there were never enough hours in the day to write, and there was always kindness at hand. I took pictures. I wrote stories. I played piano. I wrote songs.â€

These songs together comprise Merrittâ€™s third recording Another Country. Merritt describes the writing as a plainspoken look at the distance we all attempt to cross: between two people, between one heart and the rest of the world.

Merrittâ€™s debut Bramble Rose earned spots on both Time Magazine and the New Yorkerâ€™s year-end Top Ten lists. Tambourine, her sophomore album, was Grammy nominated for Country Album of the Year and earned numerous accolades from press and fans. She has appeared on â€œThe Tonight Showâ€ and â€œThe Late Show with David Letterman,â€ and shared the stage with Elvis Costello, Gillian Welch, Emmylou Harris, Ryan Adams, Willie Nelson, and Nickel Creek. Her Austin City Limits television performance was released on DVD in October of 2007.
Another Country was written by Tift Merritt, produced by George Drakoulias, and recorded by David Bianco. The players include guitarists Charlie Sexton and Doug Pettibone and Tiftâ€™s longtime band, Zeke Hutchins (drums), Jay Brown (bass) and Danny Eisenberg (keyboards).

A writer, singer and sometime photographer, Tift Merritt is a North Carolina native who lives in New York City and longs for Paris. 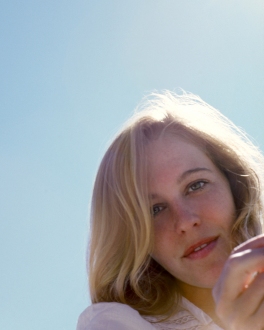 2 comments for “A New Tiff Merritt CD out February 6th”