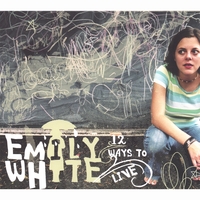 I reviewed Emily White’s previous release, Every Pulse back in 2005 (wow, has it been that long?). I enjoyed it. I noted that it had quite a political bent along with its love songs. Seeing as this is an election year I didn’t expect she’d change things up that much! There’s even a song called Election Year.

Luckily I like political songs. It’s actually music that got me interested in politics at all. I hope that happens to more people. Whomever said, “If you aren’t angry you’re not paying attention” was right on the mark. But I digress…

There are actually quite a few non-political tracks here. Some beautifully written love songs.

Emily White’s voice is not fierce like some of the other artists in this genre. It’s more a calm (but smartly serious) vibe.

The songs are melodic and interesting while remaining simple in the general sound. By simple I mean minimal, guitar, voice, not much else.

Her lyrics are imaginative and intelligent. Heart-achingly familiar as in Your Fire (I think many of us will be able to identify with that one).

← Album Review: Petits Chansons Méchantes by Claudine Muno and the Lunaboots
It’s Official (not that it wasn’t before) →