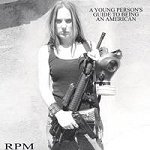 RPM opens with “Toy Soldier” a tune made “famous” (huh?) by Martika in the 80s. I loved that song.

Where the original recording was more pleading, RPMs version is more angry. I also seem to recall that Martinka wasn’t singing literally about soldiers. In fact, I think she was singing about a friend who had a drug addiction. But RPM makes this song her own. She very well could be singing about our soldiers.

I love that the dedication on the back of the CD not only honors her father, but also gives a little (ok big) slam to the current administration.

“If I Should Die” is haunting and shows the quality of RPM’s vocals.

RPM is not the only one who is really pissed off about the state of the world. I for one am glad she’s showing it, singing about it, yelling about it. If it gets people to take notice, then it’s a fantastic thing. She kicks ass.

Track Listing
Listen to track samples
1. Toy Soldiers
2. Imperfect
3. If I Should Die
4. A Young Person’s Guide (to Being an American)