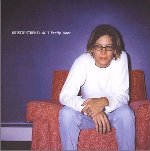 “Good to You” is a lively effort that would make a great live number. Here, Stremel’s voice is rawthroated and passionate like Melissa Etheridge’s. More reflective numbers like “Twist” shows a great tenderness in Stremel’s delivery that suits her very well.

Kristie Stremel is a confident perfromer and has made a great album to prove it. I wouldn’t be surprised if you heard a lot more of her in the future.

Rating: 5 Stars
Comment: This album is all about the sweet and bitterness of Stremel’s life but she expresses it in such an amazing way that you can’t turn it off. In comparisson to Melissa Ethridge, but better, Stremel has that twangy but very Rock’n’Roll sound to her that get’s you hooked the very first time you hear it.
name: Kristie Fan on Tuesday, July 26, 2005