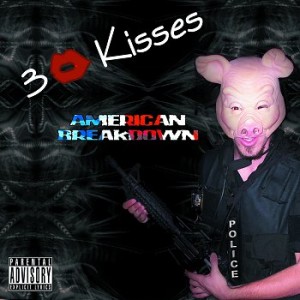 I reviewed some previous releases from Austin band, 3 Kisses. I even caught them on an episode of Wife Swap (pretty entertaining.) When I started listening to this release what stood out is that I didn’t remember them being quite this hard. But maybe it’s just been awhile since I listened to their older stuff.

Opener, Hope is Contagious, is kinda slower and is memorable. It’s got a good message too.

Then we get a little wilder.

Nutjob begins with a crazy, creepy clown laugh and goes on to admonish the subject of the song about how crazy he/she is. Peppered with some f-bombs (seriously would it be punk without?). It’s OK there’s a radio friendly mix too (however, my ears still heard the same word, maybe I don’t have it turned up enough.)

Some of these tracks are kinda jokey songs. Or at least clever and funny. PMS and Wrong Head mostly.

Wrong Head is cleverly funny. Albeit kinda raunchy (lyrics include: ‘he’s thinking with the wrong head’). I really like the melody of this one though. And it sticks with me more than the others.

Summer Love Song is…Um…weird? I think it’s about drowning someone. But it’s more melodic than some of their other tunes.

For the most part, their music is harder than what I am used to. But for me, it’s good party music.