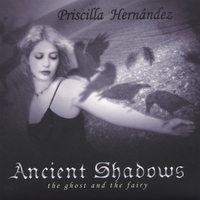 *Sigh* after listening to tinny sounding, poorly produced folk music this is just what I need. I fell like I’ve taken an antidote.

Everything about this album is perfect. Not just the voice, musicianship, songwriting, and production. The art on the package (and the website) is beautiful. This is a good example of why I am so against digital only releases. Music is more to me that just the sound, it’s everything. I want to be able to look at the gorgeous artwork, I want to read the lyrics. It all adds to the enjoyment.

So thank you Priscilla for releasing an album that appeals to more than just one of my senses.

OK now down to the music. Priscilla’s lovely voice is nicely layered and moves over the melodies seemingly effortless. The genre might be described as new age/ambient. As you may have guessed from the title, there’s a bit of the fantasy/ghosty/fairy realm here. Ethereal, I guess. It makes me want to sit on the floor of my old Victorian house, turn off all the lights, light candles, and wait for the ghosts to come.

I’ve listened to this album several times while writing this review and it’s already in my personal rotation so I’m sure there will be many more listens in the years to come. This is a beautiful release, and if I’d heard it before making my Best of 2006 list, it would certainly have been on there.

PS if you want to weep uncontrollably, go to the section on her page “For Kira”, oh my. Maybe it’s so powerful to me because I just lost my 19 year old cat (I’d had her since she was 6 weeks old) but I had to stop reading it because I didn’t want my co-workers to hear me sobbing,