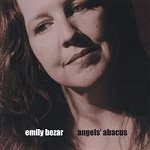 Emily Bezar’s fourth album has been a long time coming, but it’s worth the wait.

As on previous albums she mixes influences from jazz, progressive rock and classical music to form a cohesive whole. Then there’s her voice, an angelic instrument that echoes both Kate Bush and Jane Siberry.

“Right back at me” is a hauntingly beautiful, fluid song. “Losing the Middle” is a lengthy, electronica-infused progressive song. Bezar’s voice confidently swoops across the melody.

The title track ponders angels measuring the progress of souls on the way to the next level. Bezar takes good care of this intriguing prospect. Musically it’s delicate piano-based reverie with some swoonsome singing.

“Scirocco” is a sweet song with shades of David Sylvian’s jazzy dreaminess.

This late in the year I think I can say that this is my favorite album of the year. If you only buy one album to give to a loved one for Christmas, then this should be it.

Another review by Rafael Menezes

Rating: 5 Stars
First off, I have to admit I am an unconditional fan of Bezar’s music, and have been following her steps ever since I downloaded one of her songs on Audiogalaxy in 2001. I fell in love right away and found myself purchasing her first three solo releases, which will always rank among my favourite albums of all times.

Therefore, I’ve been longing to write a review on “Angels’ Abacus” since the album first came out. Yet, my desire to capture and express appropriately the grandeur of this piece made me postpone the Herculean task I assigned myself to, also, because, at first, I thought my confessed excitement for her music could intervene in my analysis.

Then again, music is passion, and “Angels’ Abacus” is an artwork, a poem, about love. And, albeit this was Emily’s first release after I became intimately acquainted to her music, it still took me by surprise that I found myself so easily overwhelmed by it: I had extremely high expectations, for I am one of those obsessed audiophiles that will not settle for less than impeccable work.

Well, Bezar was up to the task, as “Angels’ Abacus” is easily the most elegant and sophisticated album of the year (certainly, of the new millennium). In spite of being more accessible to the general audience (read “Tori Amos and Kate Bush fans”), Bezar’s fourth masterpiece by no means lacks the majesty of her previous albums: the complex progressions and harmonies, as well as her stylized psychedelia and unmatched lyricism, are still there. Also, once again, her varied influences, from avant-garde classical to experimental jazz and electronica, converge into a unique and challenging sound we won’t find anywhere else.

Indeed, the opening track, “Latitude”, gives out what’s ahead of the listener: beautiful and subtle operatic vocals, melodic and unpredictable arrangements and the certainty that Emily is a real virtuoso, who has full command of song structures and of the finest musical techniques. Nonethless, the initial vivacity soon gives room to the introspection and glamour of “Right Back At Me”, which is almost a futuristic ballad from the early 80’s.

Far from linear, Bezar progresses insofar as she gives new life to the Brazilian Bossa Nova, during the first seconds of “In Delay”, just to twist it into another “impossible to classify” art-song, infusing elements of electronica and classical singing.

Other highlights are the title track, “Angels’ Abacus”, the frenetic “Continental Slide”, the moving and poetic “Suncrash”, the catchy “In My Sky” and the beautiful “Walk That Blade”. Still, the album attains its highest level at “Metronome”, the track that better showcases the quality of Queen Bezar’s music, as it wisely uses electronic layers and textures to force the listener into an oniric and hypnotic journey to the obscure world of the fine arts. Back to Earth, the album closes with the charming and classical “Night Boats”.

A flawless art-album and another musical breakthrough by one of the most preeminent modern geniuses in the discipline of creating great songs. Extremely recommended.

← Album Review: Music To Start A Cult To by Gram Rabbit
Album Review: Through the Dark Glass Shining by Xyra →