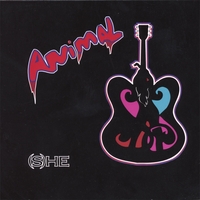 I would put this somewhere between funk and dance. On the opening song “Club Shy Guy” there’s the ‘wacka-wacka’ guitar but then at times it gets quite J.Lo disco-y.

Then there’s “Last Sunday” which is kind of reggae.

There are some nice guitar rifts that sound almost indie rock, but then it goes into more of a dancy rock vibe.

“Everything He’s Got” really shows off lead singer, Andrea Boone-Scruggs’s voice which is very good.

“Drea’s Gone (intro)” seems to be just some women talking and yelling at each other. It might be fine as an intro track but it sounds very out of place when it comes on while shuffling many CDs at the same time. Maybe that’s my fault more than anything else, but that’s how I usually listen to music.

I like “Where Were You?” It has a more fun pop/ska-like feel. It shows their diversity.

The songs are well written, the vocals are great. I’m not a musician, so I can’t really comment on the skills therein, but they sound good to me! This record is mixed and produced well too.

It may not be precisely my personal cup of tea, but I’m sure it will appeal to some of you.