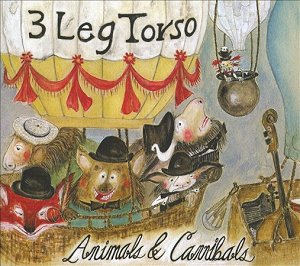 From a band called 3 Leg Torso I was expecting punk rock. Um, it’s not that. Not by a long shot. Think violin, accordion, and trumpet. Instrumental. And cool.

Once I visited their website and saw the artwork chosen, it made more sense. (it’s very cool). While I’m at it, I need to throw some kudos to their web designer. So often band websites are flash (literally and figuratively) and not much else. Theirs has cool artwork, and it very simply to navigate and has sections that a visitor would be interested in (learn, listen, watch, book, buy, etc). Very nicely done. Bravo!

The music is peppy and uplifting. I don’t even know what genre, what box, to put them in. There’s probably a name for it, but I don’t know it. The word klezmer came to mind, but I’m not sure that’s correct. (I never claimed to be a music scholar, that’s not why you’re here. I hope.)

This album is a lot of fun and I bet it would be cool to see them live in the right venue. This stuff is also perfect for a film soundtrack.

Track Listing
1. Akiko Yano
2. Csardas
3. Life and Times and Good Deeds of St. Penguin, The
4. Toothless Cannibal
5. Driving Along With My Cow In My Volga
6. According To Chagall
7. Bus Stop To Oblivion
8. Frailach #1
9. Autumn
10. Last Dream, The