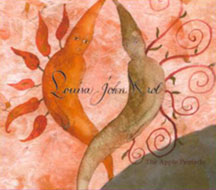 Louisa John-Krol’s new album is inspired by the myth of the Green Man and the music carries all the weight of the myth. Her voice and artistry come to the fore on these songs.

“The Windrow” is the spirit of English folk with psychedelic leanings.

“Which of these worlds” has a vocal arrangement that echoes Laurie Anderson’s vocal coos in “O Superman”.

The music is progressive rock, the mellotron is just one of many proggish instruments that’s used.

“Canterbury” base don Oscar Wilde’s tale of the restless ghost is a delightful soft hush. Its shades of Kate Bush are ghostly and eerie.

“The Witch in the Wood” mentions Robin Hood and is convincingly haunted.

“Apple Pentacle” is a masterful work by a great artist.