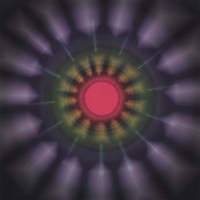 Ariana Storm is the lead singer and Kai Ariel is a multi instrumentalist.

Ariana has a lovely voice that is soft yet strong when it needs to be. She matches her sound to the feel of the music very well.

The music is hard to describe. It is somewhere in between Casio tone and deep rich ambient. The Casio tone thing is only present on a couple of songs and only in some places, so maybe that’s not really accurate. But I heard it and went ‘wha?’

For the most part the music is very lush and pretty. There are many layers here and a lot going on. This is a good headphone CD. One to listen to while just relaxing and where you can concentrate on the sounds.

The music actually sounds much like what the album cover looks like…if that makes sense. I sort of picture that art animated in my head when I listen to the record, especially the song ” Misunderstanding”.

If you on the lookout for a good new ambient dreamy record give this one a spin.