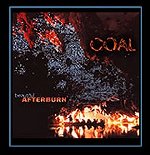 This Canadian band offer a smouldering brand of music topped with Nicole Steen’s compelling voice and guitar. The country tinged “Down in Flames” creates images not too dissimilar to those found in a David Lynch film. The guitars here echo of Chris Isaak’s lovely torch songs.

“Thrill Me” sounds like something by the now defunct “Tarnation” It’s catchy and has a nineteen fifties feel to it.

At times Coal can sound downright threatening as they do on “Metallurgy” where the guitars sound razor sharp and Steen gives it her all vocally. They still retain their great melodies though.

“Scarlet” is an effectively told sad tale that gets a fabulous reading by the band.

Coal’s CD shows they have maturity and talent enough to become much better known than they are.