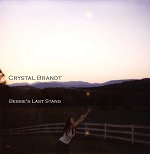 This CD incorporates many sounds, piano, guitar, drums, vocals and guess what? It’s all done by Brandt herself. She also wrote, arranged, recorded, mixed and produced the entire CD. Wow. Talk about DIY!

She’s done a nice job of it too. The songs are folky-rock with a sometimes country/Americana flair. They’re written well, with interesting melodies and intelligent lyrics. Brandt’s voice matches the style perfectly…part country trill, and part gutsy rocker.

“Fire and Brimstone” has a cool lo-fi backwater sound.

“Jerks to Work With” has a nice lush production and is a fun song about not wanting to work 9-5.

“Bottle of Wine” is probably my favorite. Brandt sings her own back up and does it in unison mostly, which I usually don’t care for (I believe that if more than one voice is singing they ought to be singing something complimentary, but not the same thing) but I like it here.

I hesitate to call it folk music because that usually makes people think ‘political’ and this is not, but it does have a folky sound. If that is appealing to you and you also like a tich of Americana thrown in you’ll dig Crystal Brandt.