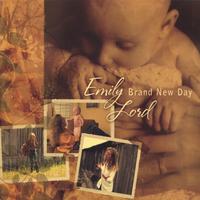 “Give a Little Bit” is a cover of the old Rodger Hodgson/Supertramp chestnut. You just gotta love someone who covers Supertramp. She does it well too!

These songs are filled with hope, love and the need for love and approval. There’s a feeling of ‘gosh I hope you like me enough’ prevalent in these songs…at least I’m detecting that. A little bit of insecurity. Not with her music, not with us, the listener. But the lyrics imply that she’s feeling that way toward whomever she’s singing to. Maybe I don’t know what I’m talking about, but check out these lyrics:

“I swear from this day forward / I will live to be worthy of you.” (One Day at a Time)

It’s not in every song, but the feeling is there.

That said, these songs are very uplifting sounding. Lord has a good, solid vocal quality that matches the genre nicely.

That beautiful baby shown all over the CD packaging is hers so maybe that experience has helped write these lovely songs.

Stand out songs: “Can’t Kiss Me Casually”, “Meet in the Middle” and “Paris”

Rating: 5 Stars
Comment: I got this CD at the urging of a friend. She said that I would like it due to the maternal theme that runs thru CD. I too just had my first child and share the same excitement and fear that Emily sings about in her song “One Day at a Time.” The CD is uplifting and made me feel better about the self doubt that began to rear its ugly head upon becoming pregnant. Funny thing too is that I played that track for another friend and she said that it spoke to her and her sobriety. Thanks, Emily!
name: Ann Barclay on Monday, July 25, 2005