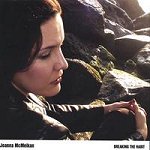 This is one of those CDs that upon first listen you feel you already know. Not because it’s derivative, but because it feels natural, homey.

McMeikan’s voice is comforting and quite skilled. The songs are AAA but with a jazzy edge. The production is great. Sounds much more like a major label release than an Indie.

Stand out songs: “Laughable Tragedy” is really cool, so is “January Snow” but “Past Unconditional” is my favorite by far.