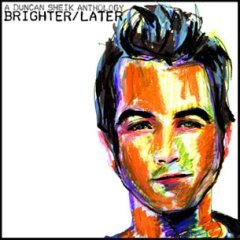 I’m going to confess something. I don’t believe I’d ever heard Duncan Sheik before putting this CD in the player. In fact, in name at least, I always got him confused with Damien Rice. I learned about those two at the same time (even though I understand Duncan Sheik has been around “forever”) and they kind of stuck together for me.

The closest I came to hearing Sheik was that I’ve seen Vienna Teng play live several times and sometimes she plays a song of his (or am I again mixing that up with Damien Rice?).

But I don’t believe I’d ever heard him before. Sacrilege I know. But cut me some slack, this is mainly a *woman in music” website, the only time I have to listen to stuff (other than what is sent to me by female musicians) is when I’m caught up with all of those. And lately that’s been never.

But this one was sent to me with the hopes of a review, and I’m almost caught up, so I decided to play it today.

I can’t believe I waited so long to check him out. These songs are amazing. So melodic and comforting. His voice is beautiful. I’m officially hooked (and I’m only on the 4th song!)

Later…upon further listens I am still hooked. This is a must have for anyone who already loves Duncan Sheik and for those who haven’t yet checked out his music, this is a very good way to get addicted.

This is going in my personal rotation. I only wish I’d finished the review before my “year end” list, this would have gone on it for certain.