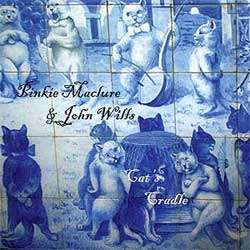 Pinkie Maclure has recorded remarkable music for a long time now, but remains a cult heroine. Her new record with John Wills will probably not change that. It’s a staggering

take on the folk tradition, but it’s also pretty strange. The masses won’t find it. But in a year when Antony and the Johnsons can get so much attention, maybe Maclure can find a bigger audience too.

“Slowly, Slowly the Water Flows” sees that incomparable voice at its most intoxicating as a simple melody follows it. The title track is an exercise in haunted folk with psychedelic touches. The martial beat of the drums lends it a special flavor

“Fine flowers in the valley” is a traditional song given a unique spin.

We end with the sweet “Lay down your arms”, which has Maclure seductively singing against a soft backdrop. Maclure and Wills deserve your time with this great record.

Track Listing
1. The Bending Wood
2. Slowly, Slowly The Water Flows
3. Cat’s Cradle
4. Good Luck Look Upon You
5. Fine Flowers In The Valley
6. I Take The Long Way Round
7. Over And Over And Over
8. Lay Down Your Arms