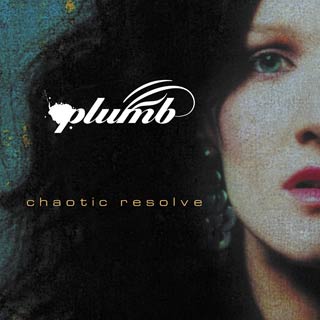 I’ve heard the name Plumb bandied about for the last few years. But I’ve never gone to the trouble to look her/them up. So I was sort of excited to see this record show up. I’ve always been curious. I read the accompanying press release and saw that she is known as a Christian singer. This gave me pause, because most artists who call themselves “Christian” end up playing music I’m not fond of. Not so here. Whew!

Plumb’s actual name is Tiffany Arbuckle Lee. As far as I know, there is no relation to Amy Lee of Evanescence, even though the comparisons don’t stop there. They even look similar with their black hair and lovely light eyes. I can’t tell you how many times I’ve heard/read the comparison when actually Amy Lee states that Plumb is an inspiration to her. Yes, folks, Plumb came first. That said, really, their styles are quite similar. I would say Plumb’s music is not quite as hard. I would not classify it as metal, but more hard, haunting rock. But at times it can also sound almost AAA. No matter what you call it, it’s beautiful.

Plumb can rock out with the best of them, but I tend to like this most when she’s just playing the piano and singing her gorgeous ballads. “Cut” is one of these. It is achingly beautiful. Actually reminds me of Sarah McLachlan when she hits the high lilting notes. She has truly got an amazing voice. I could listen to her all day.

Since I’ve never heard any other albums by Plumb, I can’t compare. I can just tell you that if you’ve been curious about her, it’s time to check out this record. Get your hands on this; you won’t want to put it down (so to speak).

← Album Review: Say Goodbye to Pretty by Camille Bloom
Album Review: What Would You Believe by Patricia Ossowski →