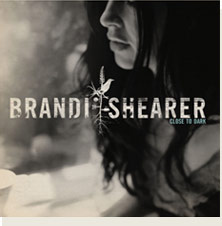 In 2006 I received Brandi Shearer’s album called Pink Lady . It was supposed to have a release date in the Spring of 2008. I listened to it quite a bit and really liked it. But I didn’t want to post the review until it was available for you to buy. I waited and waited and I never saw any indication that it was released. So I put the review away.

Almost a year to the date later (this December 2007) I got a new album of hers called Close to Dark. This one has many of the same songs on it, which is good because they’re great.

Lullabies is a beautiful jazzy song that is reminiscent of Norah Jones’, Come Away with Me but with a little more edge.

Yes, Yes, Yes kicks things up a few notches and we get a great rock song that shows off Shearer’s fantastic voice.

Her vocal style is low and sultry, with long drawn out syllables which is perfect for these songs.

On Congratulations she reminds me a little of a Collected Sounds favorite, Anne Deming. It’s a great song as well.

Yes, I have listened to more than the first three songs, several times in fact. But it seems I tend to like those first three the best. The whole record is really good, but those are stand outs to me. Most likely it’s because I’ve spend the better half of 2007 listening to them on the other CD that never got released.

Another one that was on the earlier record is Heaven and it’s great too. It’s got a great and unexpected melody line.

This is a really good CD and it has really been released!