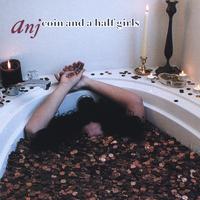 Anj is Andrea Granieri, a 20-something from the South Jersey area. She’s been singing and playing piano since she was a child and it shows.

This record intrigued me right away. The cover art is quite interesting, a girl drowning in a bathtub of pennies. And what the heck does “Coin and a Half Girls” mean anyway? Well, I can’t say that now, even after repeated listens I am any closer to an understanding. But that’s OK. You don’t have to understand art, right? Right?

At first I really liked the first few songs, then once I got to about track 9 I was slightly annoyed by the vocals. She has so much vibrato that her voice quivers. It’s also a little too opera-ish for me. I don’t mind opera voices when they’re singing that type of music (see Sasha Lazard’s “Moonfall”) but when it’s done to pop music it’s a little off putting to me. Now remember, this is only me, you might have a completely different experience.

She’s obviously a very gifted vocalist, I just think it needs some structure, or maybe control (?) I like her voice when she’s in the lower ranges it’s very pleasing. I even like the higher ranges, when the vibrato is held in check.

OK, so let’s focus on the positive. The songwriting is really very good. I really like the melody on “Former Stranger” which is the third track, but the first full song. I love the piano part on this song. In fact, I just plain love that she plays piano and very well, too. Here the piano gives this song an almost cabaret sound.

On some of the mellower songs I can see where the Carole King comparisons come into play. I’m seeing this especially on the beginning of “Ivory”. It’s a very pretty song.

The piano on “Late for Life” is incredibly beautiful. Really makes me wish I could play better (must call for lessons). The vocals and phrasing here reminds me of another musician, Pepper McGowan (http://collectedsounds.com/cdreviews/badstars.html) , who sadly, I think has left he business.

Her lyrics are also very impressive. Very well thought out, intelligent. If you like piano rock-pop (more edgy than pop in this case) you should surely check out Anj and “Coin and a Half Girls” whoever they are.