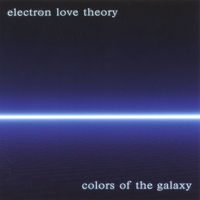 Electron Love Theory reminds me of the late 80s early 90s Brit jazzy club stuff ala Everything But the Girl (in their more techno phase). Which is interesting considering the group is from Seattle, Washington. They also do remix work for other artists. one is particular I’ve covered here in the past, Stacie Rose.

I’ve had this album in the rotation for a few weeks now and it’s really growing on me. That’s not to say it wasn’t good upon first listen, but it’s definitely getting better with repeats. It’s a very good lazy Sunday, drinking coffee reading the paper album. Quite relaxing and dreamy. This sounds especially good in headphones.

The lead singer is Gaetana Gravallese and she has a lovely voice. It’s so peaceful and welcoming. But there are a few other women that take the helm too.

On “Stirring Words” the vocals (provided by Katie Davis – not the same Katie Davis that’s been covered here before) remind me of Nina Haynes.

But even with the comparisons I made I still would say this group is unique. There are others that are similar, but none quite the same.

Stand out Songs: Into the Moonlight, but really they’re all good. This album is a nice cohesive listening experience.

Track Listing
Listen to track samples
1. The Perfect Lie
2. Into the Moonlight
3. Puzzle
4. You’ll Never Know
5. Endlessly (version 2)
6. Stirring Words
7. Change Direction
8. Uptown
9. My Own Worst Enemy
10. Where Is All the Love in the World?
11. In Your Galaxy
12. Your Love Is Bringing Me Down
13. Come a Little Closer