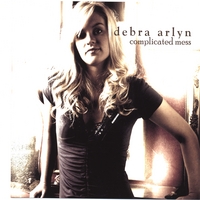 I guess the thing that stands out the most about Debra Arlyn is that her voice is perfect. It almost sounds too perfect. If she were a major label artist I might suspect that she’s had some help (if you know what I mean, cough*Britney). But seeing as Arlyn is an independent artist I’m going to assume her voice is just that spot on.

She has a voice made for commercial radio. It’s very appealing, though not terribly unique. But her songs are likeable enough that I think she could still be a very powerful artist in the AAA world. Not to mention the fact that she’s visually lovely.

The opening songs, “Let it Go” is one I want to play in the car while driving down the freeway with the windows down singing along. It’s very carefree. Very radio friendly.

A bonus (for me) is that Arlyn also plays piano. But the piano is not as prominent on this record as it is on some other artists’ releases. There is a lot of other instrumentation going on here and I daresay you might not even notice the piano on most of the tracks if you weren’t listening really intently. But generally that just makes it more appealing to the masses, so it’s probably just fine for her.

“Circles” is another really good song. Too bad it’s so short.

“Why Can’t We Start Over?” is a nice one, and has lovely piano but her voice does a little bit more than I like. It’s impressive that she can do it, but I don’t think it’s needed.

I like this record, she’s very good and the album as a whole is a very slick production, it sounds and looks very major label.