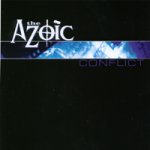 As The Azoic’s new album has yet to be released, we are given the single for “Conflict”, which features 8 stellar remixes, as well as a video track for “Conflict”, anyone would agree that this is definitely enough to tie any fan over.

The various remixes are all interesting takes on the original, with the CombiChrist mix being the one that struck me the most.

All of them vary in their arrangements, vocalist Kristy Vernick has a very versatile voice, her emotion definitely comes through on al the mixes.

I encourage you all to check out this single as there are mixes for everyone, ranging from synthpop, dreamy ethereal, to hard techno beats, The Azoic are definitely a group to watch.