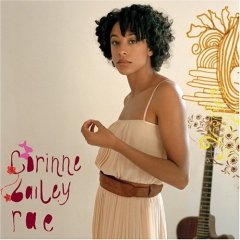 I heard this woman’s voice on her website and was immediately hooked. Since I’ve received the CD I’ve played it almost non-stop. It’s enchanting.

There’s something about her voice that is so enveloping and comfortable. I just want to listen to her all day. Very soothing. It’s slightly reminiscent of Norah Jones…they share that addictive appeal. If I had a voice like that, I think I’d sing all day instead of talking.

“Like a Star” is beautifully soulful. Being the first song, it will draw you in.

“Put Your Records On” is the single, I assume, since it is the one that’s featured on her VH1 commercial. It’s a great song. It definitely has radio written all over it. It’s also very summer sounding. I imagine it will be on the summer soundtrack of many a listener.

The production is stellar. Every little drum beat, every backing vocal, every sound is perfection. You feel that every “inch” of this was well thought out. The effort has certainly paid off.

This is my favorite record of the summer so far. Heck maybe even the year.