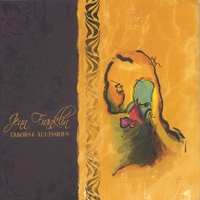 This is why I listen to albums at least twice before deciding whether or not I want to review them. The first time I heard this my note was simply, “OK”. But as many music lovers know, some days things click with you and some days they don’t. I put this in today and I really like it.

It’s definitely rock-ier than the stuff I’ve been hearing lately. Or maybe just more upbeat and louder but it’s kind of what I wanted to hear right now. At least the first song is.

The EP takes a little mellower turn with Innocence to Lose and then is downright beautiful on Fade. These songs show off her incredible vocals better than the heaver songs do. Fade is especially lovely because it greatly uses the crescendo in a very emotional way.

The songs are very likable and radio friendly without being too mainstreamy. I am glad I gave this more than one initial listen. I really enjoy it. I think because the first couple songs were so rock, I didn’t dig it right away. But the rest of the EP is beautiful. Not that those songs aren’t good, they are. It is just not what I wanted to hear at the time.

I would not be surprised to hear Jenn Franklin on the radio in the near future.