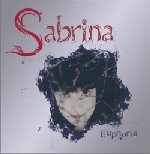 The opener “I’m Alive” is a powerful song with a strong beat. Sabrina is equally at home with slower songs such as the acoustic closer “Star”.

Her music is faintly gothic in nature, but at heart it’s good old fashioned rock.

The ballad “Bring me Down” is poignant and features a string section that’s put to good use. It’s on of the best songs I’ve heard in a long while.

This is a good album for alternative rock fans and people who have given up on the genre long ago. If anything can restore faith in rock music it’s “Euphoria”.