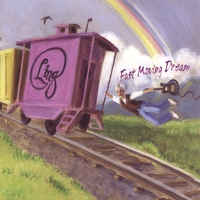 I’m not sure what I was expecting when I popped this in. I guess the look of the CD made me think acoustic folk bordering on boring (and I like acoustic folk). But I think I might classify this more as rock. It’s not hard rock by any stretch, but there are wailing guitars and rock beats.

Linq (whose real name, judging by the copy write, is Diane K Lincoln) has a voice that is unexpected to me. The photos I’ve seen don’t look like someone who would sound like that. Don’t ask me to explain, I have no idea. I just sometimes look at someone and get an idea what her voice might sound like and I’m often correct. Not here.

She was a pharmacist who decided a little later in life that she wanted to be a musician. I know what you’re thinking: She got some Glamour shots and made a recording on her computer. NO. That’s not it! Thank the good lord. This is no vanity project.

This whole record was a surprise. A pleasant one at that. I love story songs that I can get lost in and this album has that exponentially.

“Victim of the War” as you might imagine, is an anti-war song, which I’m totally cool with.

“Stalker” is nice. The guitar line is a little classic rock-y. In fact her voice is too.

“Tired” is downright haunting. I love the echoey vocals and dissonant chords. It actually reminds me of Pink Floyd.

All in all this is a really nice record and if you like folk rock with a political bent (let’s face it who doesn’t in this day and age?) you should check it out.

Track Listing
Listen to track samples
1. Victim of the War
2. Tired
3. Irish Lass
4. Open Hearts and Open Minds
5. Fast Moving Dream
6. Who I Need To Be
7. Stalker
8. Hockey Skates
9. On My Own Again
10. Never Be Mine To Love
11. Sometimes Somedays
12. Somewhere Past Midnight