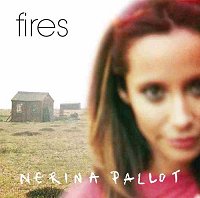 A Collected Sounds reader, Richard, contacted Nerina and suggested she send her CD to us and I’m so glad he did! What a gem! She’s my new favorite artist and I’ve been telling everyone I know about her. Anyone who comes to my house has to listen to “Fires”…not that anyone has complained, mind you.

Nerina Pallot has a nice smoky voice and it matches the lovely pop sounds that accompany it. Not to mention she’s gorgeous. Holy cats! Why is this woman not famous? She’s got it all.

I visited her website and got sucked into reading her stories about the nightmare that she experienced being signed by a label. I believe that “Mr. King” (track 6) is about one of the men she worked with (one of the few nice ones).

A couple of the songs, “Damascus” and “Halfway Home”, remind me of another artist that I can’t quite place. At times I think maybe Marie Frank, Dido, Natalie Imbruglia someone like that but with more of an edge.

“Sophia” really shows her voice, heavy on the piano (purrrrr).

I love this CD, I almost didn’t want to finish the review because then it meant that it would go into the “done pile” and I didn’t have to listen to it everyday. Not that I still can’t (or won’t, because I will dammit, you can’t stop me!), but I have a stack of 30 other CDs begging for my attention, and I just want to hear this one!

Don’t even think about asking me to select a few favorites. It can’t be done. Today “Geek Love” is my favorite but they’re all good. They’re also all “ear-worms”. I wake up in the middle of the night with hem in my head and though usually this bugs me, I don’t mind a bit.

Get hooked, you won’t regret it.

The epitome of independent music making, Nerina Pallot re-releases this offering on 14th Floor Records, after self-releasing it with the success of reaching the top ten on iTunes. Such was the impact that her thoughtful and slightly wallowing contemplation made on attendees at gigs of Ray Lamontagne, Joseph Arthur and Sheryl Crow, the capacity is now here for her to reach the audience this release deserves. The lamentation of reaching the end of your tether ‘Damsacus’, shows the journeying nature of this London born lass and invites you along for a melodious ride. A lush, wandering piano element elevates the unsettled and romanticising ‘Idaho’ that displays sharp self defiance, running off from the artist’s Bjork accompanied by Carole King vocal base. It is no surprise that this number is Nerina’s self professed ‘Manifesto’ song, as it shows personal strength and searching emotion.

‘Geek Love’ is an alternative romantic song that builds around crashing piano’s and Nerina’s nifty narrative style. Displaying the authoritative skill of Dostoevsky, she places you inside a tale of proud, shameless love. The soft dedicative lullaby styled number ‘Mr. King’ is a delectable piece that brings back your faith in humanity. This subtle songstress weaves her soft voice around a strolling accompaniment to recall an inspirational person. ‘Everybody’s Gone to War’ is the most piercing Nerina gets, by personalising the objects of war and pleading for humanity. Honesty and craft bind this album together to make it refreshing and thought provoking.

Rating: 5 Stars
Comment: I read a review on Amazon.co.uk for “Fires”, and then a few weeks later came across it in HMV, so decided to take a chance and buy it, without ever hearing any of the songs. Really glad I bought it because I love this album. Its a real grower of an album and the songs really stick in your head. I’ve been playing it for about 3 weeks solid, still really like. Idaho, Sophia, Learning to Breathe and Everybodys gone to war are all brilliant tracks. With an album like this Nerina should be massive!!
name: Claire on Thursday, October 13, 2005

Rating: 5 Stars
Comment: I had been looking forward to this album for quite some time – I have her earlier album “Dear Frustrated Superstar” and enjoyed it very much….so I was most happy to see the new one on the store shelves during a recent visit to London and bought it immediately. Superb record, even better than her first. Yes, she most definitely deserves more recognition. For those that want more of her lovely voice, she also sings a song on Delerium’s “Chimera” CD.
name: Drez on Tuesday, June 21, 2005

Rating: 5 Stars
Comment: Nerina is fabulous live and is currently supporting Suzanne Vega in the UK. She has a great cover of ‘Love will tear us apart’ too. For those near Coventry, she has a headline spot at the free Godiva Festiva on 8th July. Fantastic voice and ‘Fires’ is her second album. The first ‘Dear frustrated superstar’ is well worth a listen too. ‘Sophia’, ‘Idaho’, ‘Nickindia’, ‘Geek love’, ‘Mr King’ all fantastic tracks on ‘Fires’.
name: Woody on Friday, June 17, 2005

Rating: 5 Stars
Comment: Amy, you’re dead right. This is an amazing album by someone who ought to be up there with Dido, Natalie, Tori etc in the public consciousness. Every time “Shiver” comes on a station like Virgin I think “…and why don’t they playlist any tracks from Fires? Why?” Not a single track on Fires comes close to “filler” status. It should be HUGE, Nerina should be HUGE… if there was any justice!
name: Trev on Tuesday, June 7, 2005

← strangest package so far…
Album Review: Poison of the Sea by Patria Jacobs →