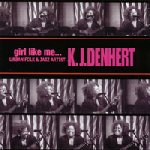 K.J. Denhurt classifies her music as Urban Folk and Jazz. I’d never heard the term urban folk before but I’d say it describes her perfectly. The music is a little bit folky and a little bit “downtown”. It’s got a nice jazzy tone to it too.

Her voice is velvet, smooth and sultry and the songs are well written and draw you in. It’s a very smooth recording.

“She Loves You” is a Beatles cover though you might not realize it right away. I was paging through the liner notes to see if Denhert wrote these songs herself and on this song I saw “Lennon/McCartney” and did a double take. It is a very different spin on the song. I like it.

She also covers Sting’s “Message in a Bottle” nicely. But it is her original songs that I enjoy most. “Violet” is beautiful song with a Carole King feel to it.

“How Many Ways” has a beautiful guitar intro and moves into a touching song.

“I Like Your Face” show how she can really rock out. It’s a fun funky song. The musicianship on this recoding is outstanding.

I would love to see her perform live. If the photos on her website (of her playing live) are any indication, she’s having a blast…and that makes it fun for everyone. But until you are able to see her live, pick up this great album and get your groove on.

Rating: 5 Stars
I have been a huge fan of KJ’s for a few years now, but this new CD gives me chills every time I listen to it. Although nothing compares to experiencing her live performances, this CD reaches your soul in a way that is truly unique. If you don’t have “Girl Like Me”, you don’t know what you are missing.
~Greg

Rating:5 Stars
I’ve seen KJ play several times and as terrific as her CD’s are, they don’t nearly capture what a fantastic artists she is. Her live performaces will absolutely knock you over! The funk that she and her guitar produce is out of this world. If you enjoy her music, even just a little bit, you will be completely won over after you see her live.
Walter