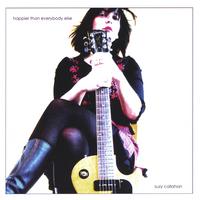 Suzy Callahan once sang with Devils Wielding Scimitars, despite the name they were a folk band. Now she makes her solo debut. I recall hearing songs by her former band and being quite impressed.

This new record is also good and her voice is a splendid thing.

“Tough on the Outside” is a delightful little song, classic pop with Beatles-y touches.

“Unreal Conversation” is a soft, down-tempo ballad with a folksy sound that plays to Callahan’s strengths. Her voice is luminous yet restrained.

The haunted strains of “Paranoia Sets In” are fascinating. Callahan works wonders without being histrionic or melodramatic.

The title song is gorgeous pop in the vein of Belly. Callahan uses her lovely voice and the jagged guitar in the chorus is sounds great.

Track Listing
Listen to track samples
1. Ghost of Spite
2. Tough on the Outside
3. Unreal Conversation
4. Paronoia Sets In
5. Brutal Day
6. Practice Test
7. Happier Than Everybody Else
8. You Don’t Scare Me
9. Shakespeare and Me
10. Until Yesterday