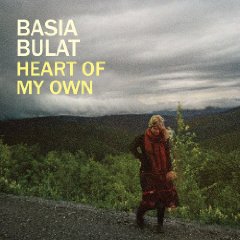 Right from the start of this reflective and inner-peace seeking 2nd album it is prevalent that Basia Bulat has exchanged some of the carefree, enchanted abandon of her debut album, Oh, My Darling. For a deeper, duskier and more searching mood, as the marching percussion scattered Go On testifies. The vocals linger in a mildly murky fashion to convey a hint of desperation and bemusement. That said, the stirring string inspired Gold Rush, starts off from a winding folk beginning, to embolden into an energetic, mild cacophonous, choral backing vocal inclusive parade. Bulat’s narrative is engaging and ranging, giving this mini-epic boldness and heart that is covered with a veil of darkness.

The winding acoustic mastery of this thoughtfully poetic Canadian is decorated with her stern, yet warming vocal touch for the bracing title track. The lyrics display worrisome, emotive leanings:

“ For every word I could undo, I’ve been uncrossed and I’ve bin untrue.
I’ve bin down, I’ve bin hard, the heart of my own burnt down low.”

Much musing is the order of the day in this twelve track foray, as a lucidly slower delivery style is generally opted for in this heart-tugging follow up. Subtle strings spindle alongside a slightly forlorn lag in Sparrow, whereby folk is stripped down to its basic qualities.

Bulat, deliberately, or not? Is giving more profile to her vocals this time around, often hovering to wretch out the air of regret and the touches of egocentrism that’s as noticeable as blobs of ink on blotting paper, at times, I’m Forgetting Everyone . Almost Orwellian nostalgia is espoused with help from patting percussion and a slow turning acoustic touch, Once More For The Dollhouse. This is juxtaposed with Walk You Down, when the carefree touch of the debut album returns for a bounding and carefree pop jaunt.

Basia Bulat now has two albums of ranging material from which to spice up her already much lauded and enchanting live sets.

← Album Review: As the City Sleeps by Mary and the Black Lamb
New song by Emma-Lee →