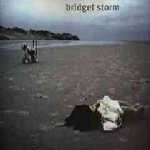 Bridget Strom is the alter ego of the dulcet voiced Julie McLarnon. She previously fronted the indie band Thrush Puppies.

Her debut album is quietly arresting. Musically she is hard to pinpoint, but there are elements of many genres including pop and folk.

“Oraine” is a slow motion dream, carried by McLarnon’s sad voice and lyrics.

“Losing It” is amazingly tender and dark. Its rich sound echoes the Tindersticks.

This is a great album.