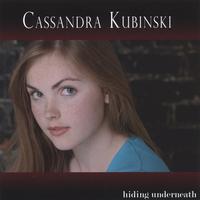 The main thing I’ll take away from this record is that this young girl has a lot of potential. I just think she needs to be her own artist. Her similarity to Vanessa Carlton is inescapable and while that shows she’s talented does not show she’s original. We already have one Vanessa Carlton, we don’t need another.

That said, Cassandra Kubinski’s release is a cute pop recording. She has a great voice and she plays piano well. She also wrote these songs and while they have a touch of an immature sound (which is to be expected, given her age) they are pretty good and show a lot of promise.

Now here comes the kicker. I wrote the above two paragraphs before reading anything about her. Just judging by the music and the cover art of the CD I put her at about 15 years old. I just read her bio and turns out she graduated from high school in 2001 which puts her at around 21 as of this writing. So I guess I feel I have to say that the music is quite um…young… at times for someone her age. If she were 15 it would be impressive, but knowing she’s 21 I’m wanting a more grown up sound.

I guess the song that sounds the most kid-like is the title track, “Hiding Underneath” (which by the way, I though she was saying, “look what’s happening to me” not “look what’s hiding underneath” but I’ll take the blame for that).

The others do have a more mature feeling and are very nice. “Cradle the Moon” is probably my favorite. When I thought she was 15 I was super impressed! I still like it though. It’s very nice.

I’m interested to see what Cassandra Kubinski’s future holds. She’s obviously very talented. I just want her to carve out her own unique sound.

Track Listing
Listen to track samples
1. Save You Tonight
2. Hiding Underneath
3. Never Enough
4. Wherever You Wait
5. Cradle The Moon