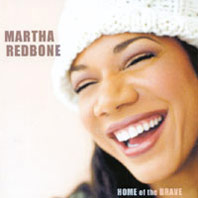 If the photo of Martha Redbone on the CD cover is any indication, she’s a fun lady. She just looks so joyful. The music follows suit.

Martha’s voice is gutsy and full of life. The music is mostly upbeat and catchy.

“Someday We’ll be Friends” has a cool horn arrangement.

“Boyfriend” is a catchy tune with a cute, humorous (and a little sad) story. She meets a guy in a coffee shop and thinks he might have potential then find out he’s gay. But then he says:

They form a friendship and she thinks she’s found her soul mate:

“Liar” is a great ballad. Beautiful melody and poignant lyrics. I can imagine this having radio play. I also imagine that it would be a nice song to hear live.

This is a fun, funky album.