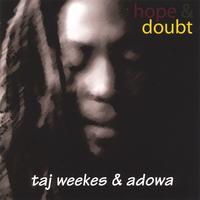 Taj was the artist spotlight for May 2005, [check it out]

I don’t know much about reggae. My initiation to it was in early college and it consisted of UB40 mostly. Even then I knew they weren’t “real” reggae (but I loved them anyway).

All I knew is that I liked Taj Weekes and Adowa. It’s very peaceful and makes me want to go to Jamaica.

So I enlisted the help of someone I knew who was well versed in this genre.

Here is what he said:

“I liked it too! More traditional in the Marley, Tosh, Isaac’s style of the 70s than dancehall/rap stuff from now.

Now I know it’s not a long review, but he wrote it on a post-it note, and it’s much more insightful than I would have been! Either way, it’s great music and Taj Weekes is a very talented guy.

Rating: 5 Stars
Comment: i checked out this c.d based on the fact that it was listed on collected sounds, and was pleasantly surprised. Not being into reggae myself i found the album very appealing. Taj’s voice is very comforting, i had no problem hearing the lyrics i thought them very clear. the lyrics sheets helped and i found his the lyrics quites poetic thanks
name: julia zekes on Friday, July 1, 2005