Album Review: In Your Face & Behind Your Back by Natasha Alexandra (NLX) 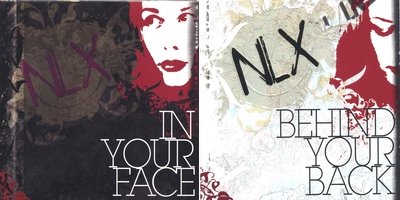 Album Name: In Your Face & Behind Your Back
Artist: Natasha Alexandra (NLX)
Year/Label: 2006 / Independent

“Behind Your Back” is one of two simultaneous releases by Natasha Alexandra, AKA NLX. The concept is that the two records, though very similar are slightly different in tone. She easily could have release all of these songs on one record, but I kind of like that they are separated here. That said I believe you should get them both as they complement each other very nicely.

“I Got Alot” is a great opening number. It’s got a great piano part and shows off Alexandra’s voice very nicely. It’s beautifully melodic. The piano reminds me of Rachael Sage’s style.

There’s something very comforting in Alexandra’s voice. It’s not your typical pretty-girl voice. There’s an edge to it that draws you in in a compelling way.

“Christian” is orchestral and sweeping.

These songs are all very well written. I wouldn’t go so far as to call them catchy, because some tend to read that as “trite” and they’re not at all. But they will stick with you.

“In Your Face”, as you might expect given the name, is the more gutsy and powerful of the two releases. It’s the one I prefer, gun to my head. Since she does choose to explode a little more on this one, something I wanted more of on “Behind Your Back”

“Code Red” is a lovely noise song. Quite powerful.

“Spin” shows her intricate piano playing and it sounds great.

I also feel I must mention her cover of Depeche Mode’s “Walking in Your Shoes”. Being an old 80s gal, this made me smile. It’s a great version. Her voice just sails.

I’ve been listening to these two records pretty non-stop for the last couple of weeks and even though the review is done, I’m going to keep on listening. These are definitely going into my personal regular rotation. I adore them both.

Rating: 5 Stars
Comment: Both of these albums are great. In Your Face is, shall we say, more produced; both well written and both I play again and again… because … well because you just want to listen to them over and over. She’s got something. Both well worth buying. Walter
name: Walter on Friday, May 19, 2006

In Your Face:
Listen to track samples

Behind Your Back:
Listen to track samples
1. I Got Alot
2. So Far Apart
3. Bleed
4. Cigarettes
5. Christian
6. Statistic
7. Everything Is Great
8. Car Crash