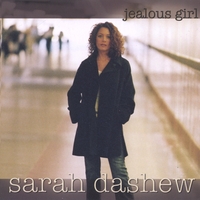 There’s a bit of a country twinge to this record. Actually perhaps more than a twinge. Being someone who doesn’t really count country as being one of my favorite genres you might think I would not like this. You would be wrong.

There’s something very endearing about Dashew’s writing and her voice. It just draws you in and you want to hear what she has to say. And it’s not just because the words Brad Pitt appear on the back of the CD. Though the songs titles are clever.

This whole album is very major label looking…well, looking and sounding. The packaging is professional, the songs are well written, she has a fantastic voice and the production is first class.

I would compare her to, maybe Catie Curtis and Dar Williams. Folk-pop with somewhat of a down home feel.

The lyrics are as well written as the melodies. They both sometimes go where expected, but that’s OK.

You want to know what the Brad Pitt song is don’t you? It’s not like the David Duchovny song of a few years ago (see Bree Sharp). This isn’t so much of an ode to a movie star, but more of a sad song about a real relationship ending or one that should be ending.

This is a really good, honest, emotional album. Please check it out.

PS Sarah, I don’t like to call them CDs either. Though I catch myself sometimes. A CD is only the piece of media the album is “printed” on. It’s kind of like calling a painting a canvas. But not everyone thinks like that. Especially not cheesy Don Johnson wannabes.