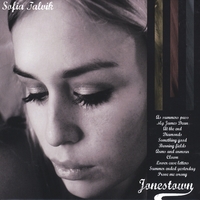 Sofia Talvik has just released her new album, which takes its name from the town where a sect committed mass-suicide. The album is far from harrowing, but has melancholy to spare.

Diamonds is a lovely and elegantly played, Talvik’s singing is beautiful as ever.
The song’s arrangement is very well done and adds to the songs sound.

Arms and Amour is a soft and appealing song about daring to be open to life and love. The melody is instantly familiar in a good way.

The title song ends the album on a wistful, but not downbeat note.

Talvik’s voice has such simple beauty to it and the words are good. This album really shows Talvik from her best side.

← Album Review: Parasols and Pekingese by Tippy Canoe and the Paddlemen
Parlor Party Update: Steph Taylor and the State Of →