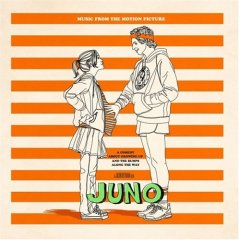 I will confess I still have not seen this movie. I want to, very much, but it’s very hard for me to get to movies in the theater. I have a very small window of time in which I can try to fit these in. Also, I have a screening room in the house and much prefer to watch films there than in a real theater with obnoxious people who talk and forget to turn their cell phones off. So I wait til things come out on DVD. I have a very healthy NetFlix account, however!

So I can’t really comment (with any authority) on how this soundtrack fits the film, but from what I have seen, it seems to quite nicely.

This is mainly a Kimya Dawson project though there are other artists here as well. It’s an interesting and eclectic mix of artists. Buddy Holly and Sonic Youth on the same record? But it works because it’s quirky just like everything else associated with the film.

Being a fan of Belle & Sebastian it’s nice to hear a couple of tunes from them.

I can live without some of the songs (the opening track comes to mind) but maybe if I had a nice memory of the film to go along with it, I’d feel differently.

Word has it that it was the film’s star, Ellen Page (whom I LOVED in Hard Candy) suggested Kimya Dawson for this project and I’m so glad that she did. The Moldy Peaches are a group that’s been flying under the mainstream radar for a long time now and it’s always nice to see talented people get the attention they deserve.

PS: just got word I’m likely going to see this at some point over the weekend, so I may write more then.

← Garrison Starr is comin to town!
Album Review: The Movie by Clare and The Reasons →