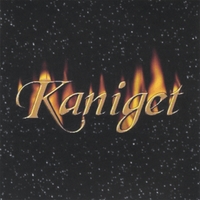 We don’t write much about rock here, but that’s not to say I don’t like it. I do. Kaniget’s debut is definitely rock and it might well appeal to fans of the genre.

Singer Surekha Zwenaju has a strident vocal presence and guitarist Harry Martin is a skilled player.

The mixing on the record seems murky and the vocals are sometimes obscured. That’s probably something they’ll fix for the next record.

The songs are strong though and the playing well done.

“Get Lost!” rocks and sounds like a very Goth song. Surekha’s vocals are suitably icy.

“Wasting my breath” is a pretty neat song, the guitar parts sound fierce and edgy.

The faint Doors vibes of “Feel the Fire” sees Martin taking over the singing with nice results.

“My Friend the Bottle” is both bitter and energetic.

The album’s a nice debut and a cool listen.