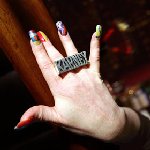 San Francisco’s Karney knows how to rock. This CD is filled with solid, well-written and fun rock songs.

She is a multitalented musician and plays acoustic guitar, electric guitar and keyboard but also has a great band backing her up. Her songwriting is skillful and interesting. Her voice perfectly suited for her style of music.

“Slap” is almost punk-ish with its dissonant chord progression and her voice is a strong scream.

She gets some vocal help from Steffen Franz on “Shellshock Girl” (as well as two other songs here) in which he adds some rap that sounds fantastic with the music and adds a little reggae feel.

“Speed of a Bullet” grabs the listener from the beginning and rocks hard.