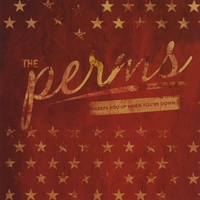 Album Name: Keeps You Up When You’re Down
Artist: The Perms
Year/Label: 2009 / Independent

Winnipeg, Canada-based band The Perms have been around in different forms for over 10 years now, since they were kids! This is their 4th album. This incarnation includes: Shane Smith (bass, vocals), his brother Chad Smith (guitar, vocals), and drummer Jaime Carrasco.

Opening track Give me all Your Lovin’ is almost classic rocky but strangely, I like it. Maybe because I’ve heard it so much. That’s what repetition does to me. I just read another reviewer that said it reminded the writer if KISS. Oh good, I thought it was just me!

Many of these songs have an anthemic, or marchy quality which makes me think this band would be a blast live with the whole room jumping up and down in as one.

I really like the title track, as I mentioned. At times the songs have a 60s pop sound, as on Big Mistake and World to Me. I like those a lot too.

I know if t’s my personal every day cup of tea, but they’re good and the songs are fun rock, pop songs. Word has it, this album is harder than their previous ones. So maybe check those out as well. I wouldn’t call these songs ‘hard’ per se; they’re definitely rock, but there’s a good measure of pop too.

Great for parties to get the room hoppin’.

← Album Review: The Good Fight by Royalchord
Have you heard Ingrid yet? →