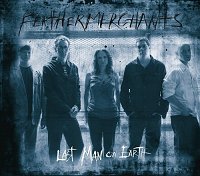 Feathermerchants have released several records before this one. All have been reviewed here by Anna Maria Stjarnell. Their first called simply, Feathermerchants (2001) was called “clearly folk in nature”. That may be, I can see that it may have roots in folk, but I wouldn’t call the music folk now. It’s more of a dreamy pop concoction with a touch of psychedelia.

Shannon Kennedy heads the group now and she has a lovely voice that suits the music well. At times she reminds me of Harriet Wheeler of the Sundays. That’s always a good thing in my mind.

“Change My Night” has an interesting production quality. The voice sounds almost lo-fi while the music is very lush.

These songs are very well written and performed and the production is just as good.

I love the spooky melody on “Head to the Here and Now”. It’s sweeping and beautiful.

They do a nice cover of The Church’s “Under the Milky Way” which is a good way to wrap up a very lovely record.