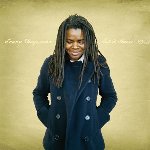 I was a big fan of Tracy Chapman when I was in college and “Fast Car” came out. I got the album (yes, album, not CD, it was 1988 after all) and I listened to it like crazy. Well my musical tastes changed a little and though I always had a soft sport in my heart from Tracy, I was not wowed but anything since that. Oh I did purchase her next album, “Crossroads; ” but I don’t believe I listened to it much.

Then one night recently I saw her on a late night talk show and she sang a song that reached out and grabbed me and wouldn’t let go. The song was in my head for three days after only hearing it once. I just loved it. So I had to go back to Tracy and try out her new album (yes, I bought it in compact disc form).

Aside from the one song I love (“You’re the One”) I thought the rest of the CD was quite boring. When I mentioned this to my husband he said, “Of course it is, it’s Tracy Chapman!” But now that I’ve listened to it more I can appreciate more things than just that one stellar song.

This really is a beautiful recording. Her voice is beyond compare, it’s sweet and sensual and motherly and friendly and all of that. Plus Tracy herself is so damn cute you just want to hug and squeeze her.

“Almost” reminds me the most of Tracy’s older stuff. “Say Hallelujah” is almost as good as “You’re the One” (and actually sounds similar). “Happy” is also beautiful. This is a record that may sound boring at first spin, but after listening a few times it really shines.

Rating: 3 Stars
Comment: Just becoming a fan of Tracy Chapman, I had the same opinion as Amy it took a couple of listens to appreciate, sometimes that is better, overcoming indiference to actually take time to listen instead of wanting the imediate gratification, this album makes you stop and listen take it in taste every spice, like a fine wine, and it warms your insides, my favorite besides the title track is “Another Sun,”Broken”, “Happy”, “I am Yours”. A great listen if you give it and youself the time
name: Renee` on Wednesday, September 14, 2005