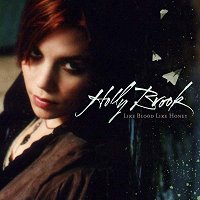 I heard a few snippets of Holly Brook’s music before this CD arrived and thought she sounded pretty good. I was hoping that the whole CD would be as solid as the few pieces I’d heard and I’m happy that it is.

I’m quite impressed that this mature sound is coming out of a young girl. But then again, Holly Brook has been at this for a long time. By the age of 15 she’d already recorded 3 indie records with her family.

Another impressive fact is not only that Brook plays piano, guitar and dulcimer…yes, dulcimer but she also wrote all the songs on this record and had a hand in producing and editing it as well.

“Wanted” reminds me of Sarah McLachlan a little. Not sure if it’s the vocals or the melody, but it’s nice.

“Again & Again” is a little edgier and is very cool.

“Curious” is beautiful. The video is also simple and lovely.

“Saturdays” is probably my favorite song on this record. It has a terrific melody and makes me happy.

And no I didn’t just listen to the middle of the CD. I’ve heard the entire thing several times. Actually I am quite fond of all the songs on the record. I just happen to like those middle ones the best. Today anyway. With more listens my favorites may change.

This is one that will be in my regular rotation for a while. It’s a little more poppy and slick than most of the stuff I hear usually, but I really enjoy it.