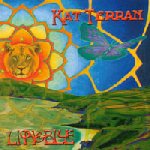 Kat Terran will not be on “American Idol”, that’s for sure. But, I mean that as a compliment. Her voice tends to wail a bit, sometimes slightly off key catching the listener off-guard but always interesting and captivating.

This is her first full-length CD. She did release a demo but it is now out of print though you can hear the songs at MP3.com (not anymore)

The sound is hard to describe. She’s not folk; there is too much “noise” and string arrangement for that. She’s not rock, she’s less “hard” than that. She’s not really alternative because she’s not that odd. But maybe that still gives you an idea of what I’m hearing, anyway. She focuses mainly on guitar but also incorporates percussion and strings.

“Aspen Tree” is an attention getter, as it should be since it’s the opening song.

“Southwest Window” is probably my favorite track. The guitar, though slightly more interesting here than on other songs, is mixed down a little more and her voice is allowed to shine. This song could probably qualify as folk.

I also really like “Dolls” which is downright haunting, vocally, musically and lyrically.

This is a well put together CD that may not be for everyone, it took me a few listens to “get it” (if I do) but if you are a little adventurous it’s for you.